2241 The more prosperous nations are obliged, to the extent they are able, to welcome the foreigner in search of the security and the means of livelihood which he cannot find in his country of origin. Public authorities should see to it that the natural right is respected that places a guest under the protection of those who receive him.

Political authorities, for the sake of the common good for which they are responsible, may make the exercise of the right to immigrate subject to various juridical conditions, especially with regard to the immigrants' duties toward their country of adoption. Immigrants are obliged to respect with gratitude the material and spiritual heritage of the country that receives them, to obey its laws and to assist in carrying civic burdens.

Father Z has in a post today a Catholic World News article on Cardinal Mahoney's criticism of the Arizona bill that would require state and local law enforcement to check immigration status. I have my own thoughts on Cardinal Mahoney's stance, but regardless of one's thoughts, the article is more about His Eminence's comparison of the bill to Nazism and communism and the reaction to such a comparison.

I only glanced through the article and Father Z's personal comments. He was evenhanded in his dissection of the article. What was more interesting were the comments after the post. As of this writing, there are seventy of them, so I'm not going to attempt to sum up the different threads of argument beyond the fact that they largely focus around the interpretation of the quoted paragraph above from the Catechism. What are the rights of illegal aliens and what are the rights of citizens of the receiving country in light of the Catechism?
Posted by Jacob at 7:42 PM 1 comment:

Have You Kissed Your Bishop's Ring Lately?

I have. First time too. I didn't go down on one knee though. I have poor balance and would probably end up falling over.

This is the first time I've ever been face to face with my current bishop. Tonight at Mass was Confirmation for the kids in our parish, the neighboring parish and the local Newman Center.

After His Excellency, three priests and one deacon filed out with a troupe of altar servers surrounding them, the congregation kept on singing. My row had already emptied out at Communion and singing isn't for me anymore, so I ducked out and on my way by the bishop, I reached out to shake his hand and gave his ring a quick kiss.
Posted by Jacob at 7:41 PM No comments:

For My Own Reference

“Priestly abuse of children is nowadays taken to mean sexual abuse, and I feel obliged, at the outset, to get the whole matter of sexual abuse into proportion and out of the way. Others have noted that we live in a time of hysteria about paedophilia, a mob psychology that calls to mind the Salem witch-hunts of 1692… All three of the boarding schools I attended employed teachers whose affections for small boys overstepped the bounds of propriety. That was indeed reprehensible. Nevertheless, if, fifty years on, they had been hounded by vigilantes or lawyers as no better than child murderers, I should have felt obliged to come to their defence, even as the victim of one of them (an embarrassing but otherwise harmless experience).

The Roman Catholic Church has borne a heavy share of such retrospective opprobrium. For all sorts of reasons I dislike the Roman Catholic Church. But I dislike unfairness even more, and I can’t help wondering whether this one institution has been unfairly demonized over the issue, especially in Ireland and America… We should be aware of the remarkable power of the mind to concoct false memories, especially when abetted by unscrupulous therapists and mercenary lawyers. The psychologist Elizabeth Loftus has shown great courage, in the face of spiteful vested interests, in demonstrating how easy it is for people to concoct memories that are entirely false but which seem, to the victim, every bit as real as true memories. This is so counter-intuitive that juries are easily swayed by sincere but false testimony from witnesses.”

Damian Thompson is as interested and expectant as I in wanting to see curial changes sooner rather than later:

Some of Pope Benedict’s supporters in Rome will be hoping that the accident-prone Bertone moves on to a job for which he’s better suited. He spends too much time on Italian politics, has a tendency to shoot off at the mouth, and isn’t much of an improvement of his predecessor, Cardinal Angelo Sodano, whose reputation is in tatters following the Legionaries scandal.
[...]

Factor in a better replacement for Cardinal William Levada of the CDF, one of Benedict’s less inspired appointments, who is rumoured to be heading for early retirement, and a fascinating possibility emerges: a Vatican that actually supports, rather than undermines or simply fails to understand, Benedict XVI’s ambition to “purify” the worship and ministry of the Church.

Do I actually think such a possibility is going to happen? I pray for it, but I don't think it's likely. The Holy Father is brave in some things, but rocking the curial boat instead of just waiting for retirements doesn't seem to be his policy.
Posted by Jacob at 12:24 PM No comments:

Damian Thompson recounts here the story from NCReporter on how Cardinal Sodano took the money of the Legion of Christ. According to Mr. Thompson's recap, Mgr. Dziwisz, formerly JPII's personal secretary and now Cardinal Archbishop of Krakow doesn't come out well either. As the known gatekeeper of the late Pope, especially as he got older and sicker, Dziwisz is alleged to have accepted sizable amounts of money from those wishing to gain admittance to the Holy Father's private Masses (including of course Father Maciel and his Legion colleagues).

Some details of the above come from Father Finigan who has his own thoughts and recollections at his blog.

Cardinal Ratzinger according to accounts refused gifts from the Legion, God bless him.
Posted by Jacob at 6:37 PM No comments: 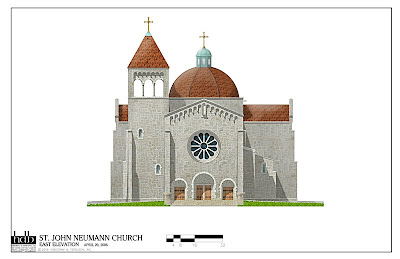 Go check out the post at NLM for pictures of how it turned out. Two parishes where I live have recently constructed new buildings. They don't quite measure up...
Posted by Jacob at 4:27 PM No comments:

But, in fact, McDonough was sacked because of his refusal to do some heated love scenes with babelicious star (and Botox pitchwoman) Virginia Madsen. The reason? He's a family man and a Catholic, and he's always made it clear that he won't do sex scenes.

Good for him. Though if I were some TV actor, I wouldn't have gotten involved in the project in the first place.
Posted by Jacob at 9:16 AM No comments: