FUMARE has a post on monetary policy and the Pope's failure to address it in his encyclical. The post references a critique by Thomas E. Woods, Jr. in Taki's Magazine.

I'm not so interested on the monetary policy bits as I am the general response of Woods to Caritas in Veritate:

I actually didn’t want to write anything about the Pope’s encyclical. In 2007, I wrote a book, Sacred Then and Sacred Now: The Return of the Old Latin Mass, in defense of the Pope’s restoration of the traditional Latin liturgy, an area in which Benedict XVI is quite knowledgeable and has much of value to say. I like this Pope. He is smart and serious, not frivolous or vain. He is in many ways a substantial improvement over his predecessor. (I cite as evidence the very fact that the media believes the opposite.) And having been viciously denounced and ridiculed by some pretty despicable people, he certainly has all the right enemies.

I have reluctantly yielded to the urging of quite a few correspondents and typed up a few thoughts. So here goes: Caritas in Veritate strikes me as at best a relatively unremarkable restatement of some familiar themes from previous social encyclicals. At worst, it is bewilderingly naïve, and its policy recommendations, while attracting no one to the Church, are certain to repel.

The response to the encyclical throughout the right-of-center Catholic world was drearily predictable: with few exceptions, it was a performance worthy of the Soviet Politburo, with unrestrained huzzahs everywhere.

It is one thing to receive a statement from the Pope with the respect that is due to the man and his office. It is quite another to treat his every missive as ipso facto brilliant, as if the Catholic faith depended on it. If his supporters are trying to live down to the Left’s portrayal of Catholicism as a billion-person cult, they could hardly do a better job.

Woods then launches into an explanation of the concepts of his book and how economics should be viewed only as what it really is, an objective study of economic processes and the theories that attempt to describe those processes. Then Woods goes on:

Nothing in the Deposit of Faith even comes close to deciding this and countless other important economic questions one way or the other. Not even the most uncomprehending or exaggerated rendering of papal infallibility would have the Pope adjudicating such disputes as these. Yet misunderstandings or ignorance regarding such seemingly abstruse points are so often at the heart of the policy recommendations that bishops’ conferences propose and papal encyclicals can seem to imply.

It is obviously not “dissent” merely to observe that the cause-and-effect relationships that constitute the theoretical edifice of economics are not a matter of faith and morals. They simply do not fall within the range of subjects on which a Catholic prelate is endowed with special insight or authority. Catholic laity cannot head up petition drives against them. They are facts of life. Facts cannot be protested, defied, or lectured to; they can only be learned and acted upon. There is no use in shaking our fists at the fact that price controls lead to shortages. All we can do is understand the phenomenon, and be sure to bear it and other economic truths in mind if we want to make statements about the economy that are rational and useful.

Woods closes out the section of his critique by basically saying what we already know in the real world (and the Holy Father does in his Catholic world when dealing with Catholic things): just saying it should be this way won't make it so, especially when economics is a trade-off. One can't ask for higher wages for all bread winners and expect employers to be able to pay to hire as many bread winners as before.

Anyway, go read through the rest. It's pretty interesting.
Posted by Jacob at 9:40 AM No comments:

I follow a few cases at websleuths.com including the following: 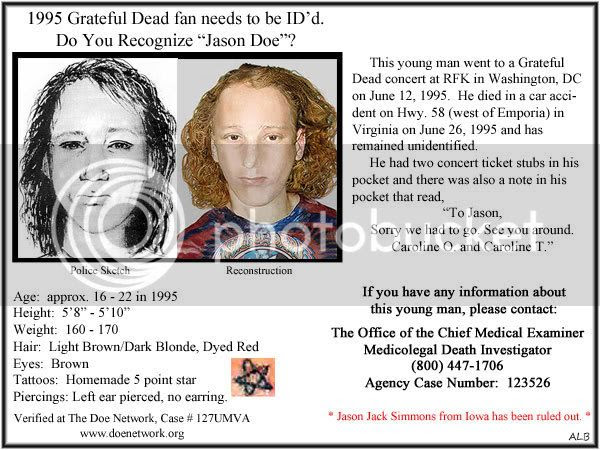 We have a few readers out that way. Leave a comment if you know anything.
Posted by Jacob at 9:56 AM No comments:

The Canonization of John Paul II

Damian Thompson at his blog Holy Smoke takes a look at a post by a law student named Eric Giunta at RenewAmerica.

Though Catholics and others are loathe to admit it of an otherwise beloved Pope, John Paul II oversaw a church which deteriorated in both its inner and outer life. His callous indifference toward the victims of priestly sexual abuse in refusing to meet personally with a single one of them, and his stubborn refusal to compel the resignation from office of any of the bishops who aided, abetted, and covered-up the abuse, are testamentary to his utter failure: not as a Catholic or a theologian, but as a Pope.

And so on. Read the entire thing at RenewAmerica, but that's the gist. After the long excerpts, Thompson concludes with the following:

I don’t endose these views: in fact, it seems perfectly obvious that the reign of John Paul II was one of slowly growing orthodoxy in the Church, nurtured by his Catechism and a series of magnificent encyclicals. And those Catholics who want to draw a sharp distinction between the agendas of John Paul and Benedict are overlooking the fact that the theological direction of the last pontificate owed an enormous amount to the current Holy Father, who would be horrified by Giunta’s article.

Yet this debate is clearly gathering pace. JPII loyalists are also on the warpath. (George Weigel is using the Maciel scandal as a stick with which to beat this administration, not the last one.) So I’d be interested in your views.

Though Mr. Thompson is right that a lot of good that we're seeing now began first during the pontificate of John Paul II through the continued influence of Joseph Cardinal Ratzinger, I think that Mr. Thompson ignores by painting over Giunta's comments as just more anti-JPII rhetoric that Giunta's points deserve at the very least direct refutation since they aren't dealing necessarily with /theology/. John Paul II was by most accounts an indifferent administrator at best. Whether that in itself is grounds for blocking canonization I cannot say, but that indifference certainly had consequences that we're living with and cleaning up to this day.

This comment left by Hamish McGlobbie contains the best advice:

I think we could wait 20 years or so before rushing to canonize anyone. Presumably it is God who decides whether they go fast-track to Heaven, rather than a Vatican committee, and it will be easier to make such evaluations when we have had more time. JP2 = good guy? (yes). JP2 = saint? (hard to tell).

To be Roman Catholic, on the other hand, is to join a motley crew. We come from all classes. We are sometimes desperate in our prayers and excessive in our devotions.

Yes, let us continue to bring a greater dignity and reverence to Roman Catholic liturgy, and yes, in this let us learn something from Anglo-Catholics if we can. But let us never lose sight of who we do it for. Someone once said to Newman, dismissively, ‘Who are the laity, anyway?’ To which Newman quietly replied: ‘The Church would look pretty foolish without them.’

Cardinal Newman's cause is coming along. I was glancing through the website for bits of material and decided to share with you all.

The current process for canonization is a bit too streamlined and modernized for my tastes, but the venerable Cardinal Newman is I would say more than worthy of being raised to the altars.
Posted by Jacob at 6:49 PM 1 comment: