Criticism over Obama invite mounts at Notre Dame [my way]:

"To not allow someone here because of their beliefs seems a little hypocritical and contradictory to what the mission of the university and church should be," he said.

I find this quote to be quite entertaining. Let's look at what Mr. Carrington is driving at here more closely, shall we? The parts I've bolded are the key points.

So let's review: Mr. Carrington is criticizing the Catholic Church as hypocritical and contradictory because of the mission he thinks it should have, not its actual mission. So I put it to Mr. Carrington: What do you actually think about the Church's mission as it exists now, not what you think it should eventually morph into to suit your tastes?

And no, Mr. Carrington, you cannot claim that you misspoke or that this is all just semantics. You're a student in what is perceived to be a one of the better universities in the United States. No cop outs here.
Posted by Jacob at 9:45 AM 1 comment:

...What we used to call 'Irish' and 'Catholic.' My dad is one of ten and descends from German and Irish stock.

The movement, called Quiverfull, is based on Psalm 127, which says, "Like arrows in the hands of a warrior are sons born in one's youth. Blessed is the man whose quiver is full of them."

Those in the Quiverfull movement shun birth control, believing that God will give them the right number of children. It turns out, that's a lot of kids.
[...]

"I think, help! Imagine if we had had more of these children!" Campbell says, adding, "My greatest impact is through my children. The more children I have, the more ability I have to impact the world for God."

A Christian God, that is. Campbell says if believers don't starting reproducing in large numbers, biblical Christianity will lose its voice.

"We look across the Islamic world and we see that they are outnumbering us in their family size, and they are in many places and many countries taking over those nations, without a jihad, just by multiplication," Campbell says.

Still, Quiverfull is a small group, probably 10,000 fast-growing families, mainly in the Midwest and South. But they have large ambitions, says Kathryn Joyce, who has written about the movement in her book Quiverfull: Inside The Christian Patriarchy Movement.

"They speak about, 'If everyone starts having eight children or 12 children, imagine in three generations what we'll be able to do,' " Joyce says. " 'We'll be able to take over both halls of Congress, we'll be able to reclaim sinful cities like San Francisco for the faithful, and we'll be able to wage very effective massive boycotts against companies that are going against God's will.' "

Aside from the religious arguments, I dare you readers to read this from USAToday and then try and tell me why this is not a good idea.
Posted by Jacob at 9:17 AM 1 comment:

The political blog Politico has video and a summary:

At the White House’s celebration of Greek Independence Day Wednesday afternoon, President Obama got a little unexpected flattery from Archbishop Demetrios, the head of the Greek Orthodox Church in the United States

Listing a series of challenges Obama will need to deal with as president, Demetrios predicted: Demetrios to Obama: "Following the brilliant example of Alexander the Great...you will be able to cut the Gordian knot of these unresolved issues."

Obama responded by making a face to the crowd, prompting laughter. And when he took the mic, he speculated on what the compliment could do for him at home.

"I will tell Michelle I have been compared to Alexander the Great. I will see if that gets me a little more respect,” said Obama, who conceded: “She's still the boss."

While the Greeks in the US seem to have no problem hanging out with the president, the Romans are having difficulties. President Obama has accepted an invitation to speak at the commencement at Notre Dame later this spring and Catholics who actually care about their faith are up in arms. A coalition of student groups from the university have coordinated and put together a website: Notre Dame Response.

In defense of the unborn, we wish to express our deepest opposition to Reverend John I. Jenkins, CSC’s invitation of President Barack Obama to be the University of Notre Dame’s principle commencement speaker and the recipient of an honorary degree. Our objection is not a matter of political partisanship, but of President Obama’s hostility to the Catholic Church’s teachings on the sanctity of human life at its earliest stages. Further, the University’s decision runs counter to the policy of the United States Conference of Catholic Bishops against honoring pro-choice politicians. We cannot sit by idly while the University honors someone who believes that an entire class of human beings is undeserving of the most basic of all legal rights, the right to live.

Additionally, Fr. Jenkins has put some of his students into a position of moral dilemma as to whether they can attend their own graduation. Many pro-life seniors, along with their families, now feel personally conflicted about participating in the commencement. The lack of concern for these devoted sons and daughters of Notre Dame, who love this University and the Catholic principles on which it was built, is shameful.

And of course there is a petition from the Cardinal Newman Society here protesting the invitation. About 140,000 people have added their names so far, including myself.
Posted by Jacob at 8:44 PM No comments:

The Church in the United States

“Some Catholics in both political parties are deeply troubled by these issues. But too many Catholics just don’t really care. That’s the truth of it. If they cared, our political environment would be different. If 65 million Catholics really cared about their faith and cared about what it teaches, neither political party could ignore what we believe about justice for the poor, or the homeless, or immigrants, or the unborn child. If 65 million American Catholics really understood their faith, we wouldn’t need to waste each other’s time arguing about whether the legalized killing of an unborn child is somehow ‘balanced out’ or excused by three other good social policies.”

The title basically sums it up.

"My position is that it is not fitting to enter the Western Wall area with religious symbols, including a cross," said Rabinovitch in a telephone interview with The Jerusalem Post Monday. "I feel the same way about a Jew putting on a tallit and phylacteries and going into a church."

That's his preference and he's welcome to it. I myself would not care what a Jew was wearing if he were to come into a Catholic church. This is just nonsense.

Before 1967, when the Western Wall was under Jordanian rule, Jews were forbidden to pray there. In the Six Day War, Israel conquered east Jerusalem, including the Western Wall, from Jordan and prayer was opened to all religions.

If the wall is going to be open to all religions, then all religions should be able to show up in their usual garb and the garb of a Christian includes a cross.
Posted by Jacob at 7:53 PM No comments:

If you do nothing else today, read this review of Father Newhaus' last book by the eminent columnist and commentator Spengler of Asia Times Online. The book is going on my wish list.

President Abraham Lincoln famously called Americans an "almost chosen people". That might qualify as America's national joke, for you can't be "almost chosen" any more than you can be almost pregnant.

Lincoln's oxymoron frames the tension between the religious impulses that made America and the reality that ultimately it is one imperfect polity among many others. America is "a country with the soul of a church", as G K Chesterton wrote, and by no accident, the only industrial nation (apart from Israel) in which religion plays a decisive role in public life. The central role of religion continues to polarize Americans and confuse foreign observers.

The working of faith in America's public square is more complex than Americans acknowledge, or foreigners understand, Richard John Neuhaus shows in this study of the heavenly city versus the earthly city of our exile.
[...]

In some respects, Poland deserves the special admiration of her pre-eminent son. As a breakaway Soviet buffer state on the central front, Poland occupied center stage in the Cold War, and the Polish people led by the Catholic Church rose heroically to the occasion.

The trouble is that Poland's story is coming to an end. The country's population will fall by almost 30% by mid-century, and the median age will rise from 36 years to 56 years. Benedict XVI, for that matter, ranks by my reckoning as the best mind on the planet, but it is questionable whether today's Germany is capable of educating another Joseph Ratzinger.

Letter to the Bishops

Father Z has an English translation of the letter Benedict XVI has sent out to all the bishops regarding the FSSPX and the Williamson affair. Father Z makes pertinent observations throughout in his usual style and I don't feel the need to reproduce the letter here or pull out any excerpts.

My observation after reading it is pretty simple. If you want the letter's technical merits, you'll need to look elsewhere. I found the letter to be direct and to the point, not at all like so many other letters we get out of Rome. Benedict XVI was obviously not expecting and ended up being personally affected by the Williamson affair and it shows in his letter. While I am not one to prognosticate, I would venture a guess that this letter may prove to be a turning point, not in the FSSPX's relations with Rome perhaps, but rather in Benedict's mindset so far.
Posted by Jacob at 7:47 PM No comments:

Cardinal Mahoney, the archbishop of LA here in the US of A, presides every year over a congress of some sort. There is an official name that I could go look up, but I don't really think it's important given the good cardinal's outlook on various points of Catholic doctrine, tradition, law, etc.

There are a few pictures from past congresses that I've seen on other blogs or news reports that I've saved just because they were so priceless and in honor of the most recent congress and a post by Father Finigan, I share them with you all here. 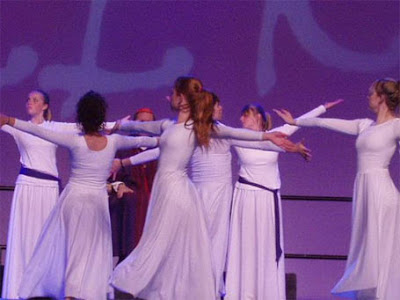 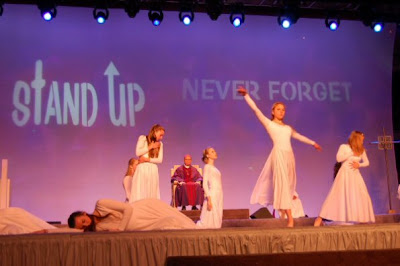 Captions are of course welcome.
Posted by Jacob at 8:52 PM 2 comments: